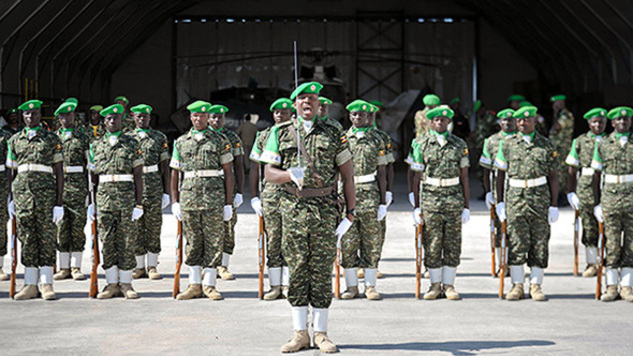 African Union troops at a ceremony in Mogadishu: The politics of troop-contributing nations could imperil their mission. (Image by AMISOM/FB).

Al Shabaab spokesman, Sheikh Abdulaziz Abu Musab said in a statement seen by ArmedPolitics that their fighters have attacked AMISOM military bases in the town of Qoryoley, about 120 kilometers (74 miles) south west of Somali capital Mogadishu on Friday evening.

Sheikh Abdiaziz Abu Musab, a spokesman for the al Qaeda-aligned group, said over eight mortar rounds have landed in the AMISOM base and then “heavy fighting between Al shabaab fighters and AU soldiers has erupted inside the army outpost.”

The African Union peacekeeping force, known as AMISOM, said in a Twitter post that there was no casualties on soldiers and they had remained in control of the base in Qoryoley after a gunfight that lasted several hours early on Friday evening.

AMISOM has added that Al Shabaab fired mortar shells in Qoryoley, killing two civilians – a 9-year-old girl and her elder sister after a mortar struck their house in the town, and wounding a local Somali police officer.

“The young girl has passed away instantly, while her sister succumbed to injuries during medical treatment at AMISOM’s Forward Base,” the mission said in a statement posted on its official Twitter account.

Despite losing major ground in the past five years, Al Shabaab has stepped up its hit and run attacks against Somali security forces and AMISOM troops in south and central Somalia, as the Islamic Extremist group vowed to disrupt an upcoming parliamentary and presidential election scheduled for November 30, 2016.