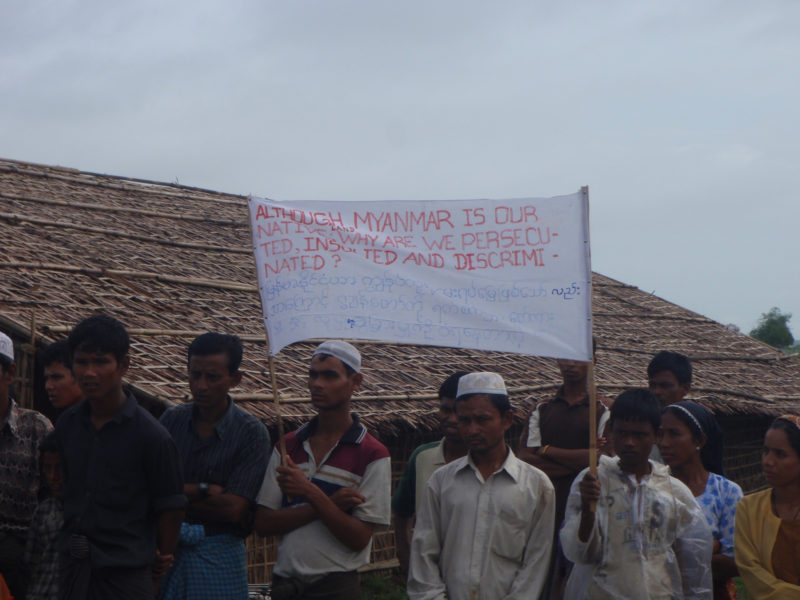 The simultaneous attacks were carried out in the early hours of October 9, when at least 250 attackers armed with knives, homemade weapons and firearms stormed three outposts and killed nine police officers. They reportedly stole at least 50 guns and 10,000 rounds of ammunition before fleeing.

Nobody claimed responsibility for the attacks but the government said they were conducted by a group inspired by Islamist militants. They now fear that it could be the beginning of a new insurgency by members of the Muslim Rohingya.

The stateless minority group makes up 1.1 million of the population of Rakhine state and they have been called one of the most persecuted minorities in the world by a number of human rights organisations. The country’s Buddhist majority label them illegal immigrants, despite them having lived in Myanmar for generations.

The government has appealed for caution and restraint and the military has deployed troops to the Rohingya-majority town of Maungdaw. State media claims that four men suspected of being involved in the attacks have been captured. However, the increased military presence has escalated tensions, and clashes with locals have left at least 15 dead, including a number of soldiers.

“For years now we’ve tried to fight for our rights, but the government has always wanted to wipe the Rohingya population out,” Ro Nay San Lwin, a Rohingya activist told Radio France International (RFI) on October 12.

“That situation won’t change, Rohingya will be more persecuted because they blame the Rohingya for these attacks. Their situation is worse than ever. And people who are depending on daily wages cannot any more, so now many people are starving, just because they cannot go to work, they cannot go from one village to another, they all are locked inside their own villages.”

Myanmar’s newly elected leader, Aung San Suu Kyi took office in March and was seen as a sign of hope for the country, which had been engulfed in civil war since 1948. Some in the Rohingya community also expected the Nobel Peace Prize laureate would help bring an end to the discrimination against their community.

However questions were soon raised over her views on the minority group, particularly when she banned officials from using the minority group’s name in June. She also requested that the United States ambassador does not use the term, saying that the Rohingya are not recognized as part of the 135 official ethnic groups of Myanmar and using their name does not support national reconciliation.