Johannes Hahn, the EU Enlargement Commissioner during his visit to Macedonian capital of Skopje pointed out the importance of elections scheduled for December 11, as the only way of solving the nation’s ongoing political crisis. 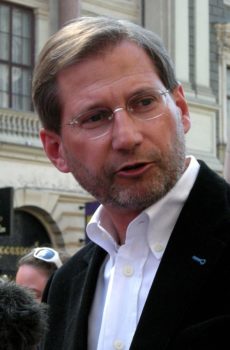 Today’s visit (October 14) of Commissioner Hahn to Macedonia came at the height of political uncertainty in a country strongly divided by a political crisis which erupted in 2015.

After meeting with the highest political officials in Macedonia and the Special prosecutor, Hahn noted the necessity of the election scheduled for December 11.

However, while the ruling VMRO-DPMNE party claims all the conditions for a fair and credible election have been meet, the parliaments’ (which is dominated by VMRO-DPMNE MPs) failure to dissolve itself on Wednesday (October 12) could delay the election.

The most prominent opposition party Social Democrats (SDSM) saw the parliament’s failure to dissolve as a trick by a ruling party to intentionally delay the election. They told Commissioner Hahn that their ministers in the interim government will do everything in their power to prevent election fraud.

The two-year long political crisis in Macedonia started in 2015, when the opposition accused the ruling VMRO-DPMNE party, and the government led by its leader, Nikola Gruevski of illegal wiretapping of more than 20,000 people, including government officials, ministers and party officials.

Opposition accusations gained momentum, when they started publicly releasing the covertly recorded tapes, claiming they reveal the government’s involvement as well as other criminal charges against members of the cabinet which included election fraud.

The accusations by the opposition sparked mass protests against the VMRO-DPMNE government and then Prime Minister Nikola Gruevski. The mass protests came to be called the “Colorful revolution” as protesters frequently threw paint on government’s buildings.

On the other side, VMRO-DPMNE government led by Gruevski claimed that the tapes were fabricated by “foreign intelligence agencies” in a effort to destabilize the nation. Gruevski’s statement encouraged his supporters to organize counter protests to anti-government protest led by the opposition.

The crisis was briefly paused by a deal reached by Macedonian parties, which was mediated again by Johannes Hahn earlier this year. The deal required the PM Gruevski to resign, which he did, and enabled the opposition SDSM to name few ministers in the interim government.

The deal also required Macedonia to undertake serious law reforms and enable the creation of the office of the Special prosecutor.

(Written by Dejan Scepanovic; Editing by Robyn Hunter & Omar Nor )