ISLAMABAD, Pakistan — The Shuhda (martyred) Foundation has threatened the Pakistani government for not punishing alleged blasphemy convict, Asia Bibi, a Christian field worker who was registered for insulting the Prophet Muhammad. 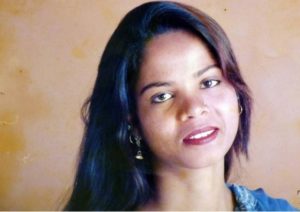 Asia Bibi, a file Photo [by The Nation, Pakistan]

Hafiz Ihtesham Ahmed, the spokesperson of Shuhda Foundation, has said in his statement that they will use Islamabad as the center for the anti-government agitation against the government. “Those who protect blasphemy convicts would be considered blasphemous,” reads the statement.

Shuhda Foundation, is representing the families of those lost in the well known Lal Masjid (mosque) operation, when the religious leader of the said mosque had announced Sharia Law in the capital city Islamabad, in 2007.

Asia Bibi had been accused of insulting the Prophet Muhammad in 2009. She appeared before Lahore High Court that decided “death penalty” for the crime in 2010, in the light of the Pakistan Penal Code.

Asia Bibi’s husband is hopeful that his wife will get her appeal approved by the country’s Supreme Court in the next appearance.

“Blasphemy law is exiting both in Pakistan Penal Code and the Islamic Personal Law,” says Salam Khan Mandokhail, a practicing lawyer. “The case will face delay, because judiciary is under pressure.”

Pakistan has several cases of blasphemy, mostly registered against Muslims. And beside them the Non-Muslims are also registered as blasphemy alleged convicts.

On January 4, 2011, Islamabad, Pakistan, the then Punjab province governor, Salman Taseer was assassinated by Mumtaz Qadri, his guard – from the elite police commando unit. Taseer had showed interest in the Asia Bibi case on a “humanitarian” basis and had “criticized the blasphemy law”.

The Taseer’s assassin, Qadri was hailed as a hero by the religious groups in Pakistan and later court decided his death penalty and he was hanged to death on February 29, 2016.

The Pakistani court in Shabqadr region of Charsadda district was attacked by Jamat ul Ahrar Tehreek e Taliban, Pakistan. The attack resulted in the death of 16, and was claimed as the avenge of Mumtaz Qadri’s execution by the country’s supreme court.