South Sudan Information Minister, Michael Makuei has also said Kiir is healthy and is going about his duties normally. 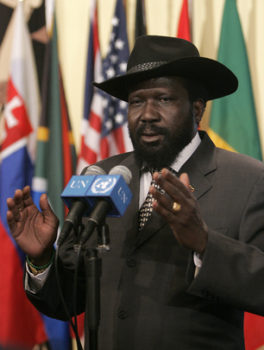 “We would like to inform all our citizens that the information which came a few hours ago, in various social media that President Salva Kiir has died is yet another wishful thinking,” Ateny told the state-owned South Sudan Broadcasting Corporation.

Social media in Juba was dominated by rumors of President Kiir’s ill health and death on Tuesday, prompting Ateny to respond.

“President Salva Kiir is healthy and is going about his duties normally. He was in his office today until 3:00pm and had no any complaint about his health,” stressed Ateny.

This comes as Kiir’s rival and South Sudan rebel leader, Dr. Riek Machar headed to South Africa for medical check-ups. Machar has told reporters in Khartoum, Sudan that his stay in South Africa would be temporary and that he would leave after the tests, but he gave no details of his medical condition.

This is Machar’s first media interview since he fled the South Sudanese capital Juba as fresh fighting flared in July. Machar was hospitalized in Khartoum in August after he fled South Sudan, where widespread clashes were breaking out between the rivals in its civil war. The former South Sudan first vice-president addressed the press at the Khartoum airport before his departure.

“I thank the government of Sudan for the hospitality and I want to announce here that I am heading to South Africa for medical treatment,” said Dr Machar.

The rebel leader recently declared that he would work to bring down the government of President Salva Kiir.

Machar returned to Juba earlier this year under a hard-won peace deal but it broke down in July when fresh clashes broke out between his ethnic Nuer supporters and the mainly Dinka troops of the government. After his escape into exile in Khartoum, Machar last month urged “a popular armed resistance” against his rival President Salva Kiir’s government.