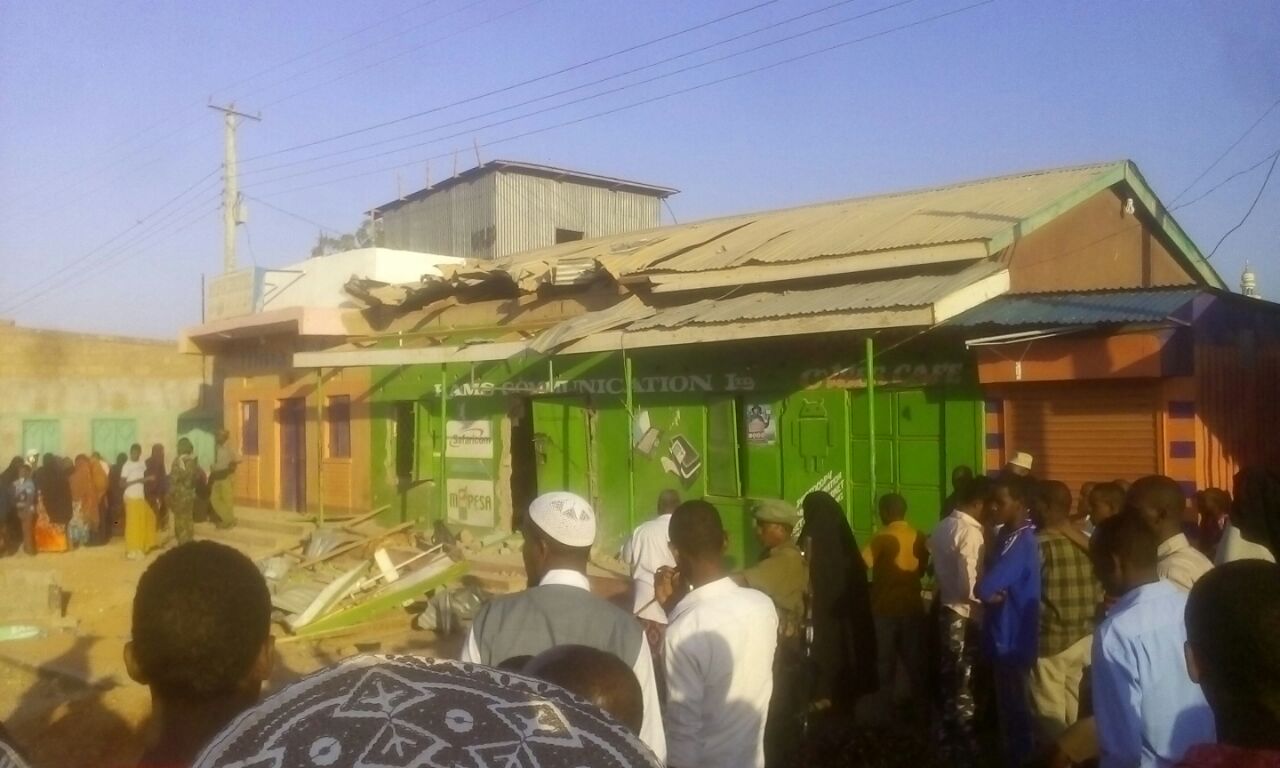 Residents and police officers on the scene of the horrific attack on a building in Mandera (Photo: ArmedPolitics/Richard Mbaya)

MANDERA, Kenya – Six people were killed in Kenya’s border town in Mandera when armed Al Shabaab militia attacked the town at 2:00am on Thursday morning.

Kenya’s North Eastern Regional Commander, Edward Mwamburi has confirmed the incident saying one person was injured in the early morning attack that took place at Bulla public works plot in Mandera Town near the Somali border.

“The building had 19 people. Six were killed and one was seriously injured in the attack,” Mwamburi said while addressing the media in Garissa Town.

Mandera Governor, Ali Roba thanked Kenya’s security officers for responding swiftly to the attack, adding that he grieves with the affected families.

“We have suffered another sad attack in Mandera where six have been confirmed dead and one seriously injured. We grieve with our families,” he said.

Police are yet to clear the building as they suspect that the building has been rigged with improvised explosive devices (IEDs). Kenya Defence Forces (KDF) bomb experts have been deployed to assist in the operation.

The assailants, who were reportedly clad in Kenya Army uniform, have escaped towards Somalia. Mwamburi has, however, confirmed that an operation to capture the assailants is underway.

Al Shabaab have taken responsibility for the attack, with their military operations spokesman, Sheikh Abdiasis Abu Musab, telling Reuters, “We are behind the Mandera attack in which we killed six Christians.”

North Eastern Kenya has been rocked by several attacks over the past few years, largely because of the regions proximity to war-torn Somalia.

Last year Kenya stated the construction of the 700km Kenya-Somalia border fence to bar unwanted people from illegally getting into the country from the neighboring Somali.

Speaking in 2015 during the launch of the wall, Kenya’s Interior Cabinet Secretary, Joseph Nkaissery said the fence will not deter or limit the movement of other people from and to Somalia as perceived.

“This fence will help us check on people like Al Shabaab from crossing to and from Somalia. We will not limit movement of other people,” he said. The minister said there will be entry points with immigration officers at Mandera, Elwak, Liboi and other areas down to Lamu to screen those getting in and out of the country.