KABUL, Afghanistan– Yesterday, August 31, the Taliban has released the fresh video message of the Canadian-American family, who are asking for a change in Afghan government policies awarding death penalties to “these men”, referring to Taliban leaders who are being held in Afghan prisons. Joshua Boyle, a Canadian citizen, and his wife, Caitlan Coleman, an American, were abducted from Afghanistan in 2012.

According to the family members, they were last contacted through a net café in an unsafe town of Afghanistan, and later they appeared in the Taliban video. 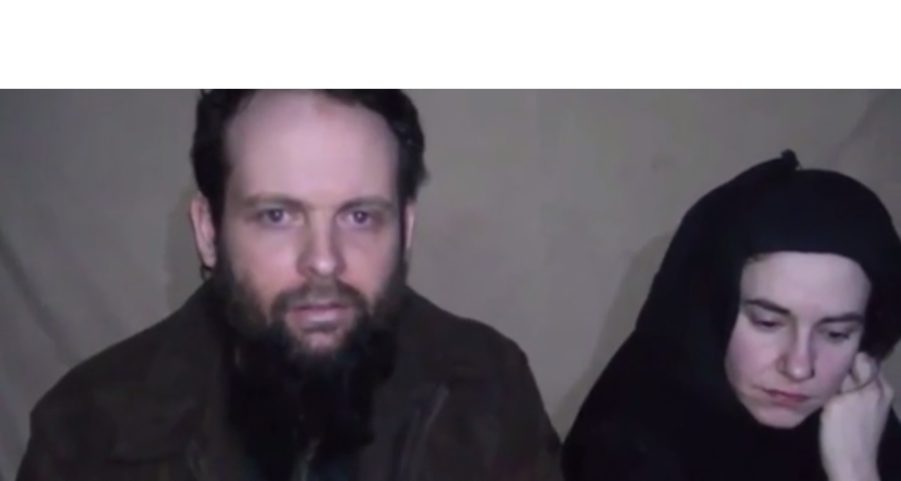 Joshua Boyle a Canadian citizen and his wife, Caitlan Coleman an American [Photo from the released video]

Caitlan was pregnant with her first child at the time their abduction; later her family was informed about the birth of her first child in a letter they received,  and now she has two children.

“We are told that the Afghan government has hanged and executed from among the prisoners they have taken,” says Joshua Boyle, the Canadian citizen in a video message. “Our captors are terrified at the thought of the mortality that is approaching; they are saying that they will take reprisal from our family, and they will execute us, women and children included”.

If no change  is made in the Afghan and Canadian government policies, the Taliban will take the lives of the kidnapped Canadian-American family, said Joshua.

“Because of their fear, they are willing to kill us, willing to kill women, to kill children, to kill whomever, in order to get these policies reversed, or to take revenge. Because of this, I ask if my government can do anything to change the policies of the Afghan government, to stop their policies of executing these men before they start executing their prisoners’ family they are holding”, said Caitlan Coleman, the American member of the hostage family.

The US State department spokesman has said that they are evaluating the video released by the captors of the American citizen and her family members.

“We’re aware of recent reports that a video featuring U.S. hostage Caitlan Coleman and her husband Joshua Boyle has been released. I can tell you that the video is still being examined for its validity,” says John Kirbay, spokesperson for State Department today. “We remain concerned, obviously, about the welfare of Caitlan and her family, and we continue to urge for their immediate release on humanitarian grounds. We are regularly engaged with the governments of both Afghanistan and Pakistan at the highest levels to emphasize our commitment to seeing our citizens returned safely to their families.”

The current government has been hard on Taliban leaders who have been captured, and it may be a tactic to pressurize the leadership for shunning violence this way, told Gul Marjan, a Peshawar-based researcher, to ArmedPolitics. “Former President Hamid Karzai had very soft policy toward the Taliban with an aim that they may turn to peace talks, but President Ashraf Ghani has gone harder.”

Gul agrees that the death sentences of the imprisoned Taliban leaders would have caused the current video message of the Canadian-American family.

Anas Haqqani was arrested by the Afghan intelligence agency, National Directorate of Security, in October 2014.

The Haqqani Network remains one of the top militant groups across Afghanistan for attacking both the Afghan government and International Community, and causing the deaths of civilians in their attacks.

In May, the Afghan government hanged six Taliban prisoners in Pul-i-Charki prison after the judicial process had found them guilty of charges of terror creation and death of civilians.