Today, August 17, during his visit to Kosovo’s capital Pristina, US Vice-President Joe Biden called for Kosovo to ratify the border deal with Montenegro, and to allow the creation of the Union of Serb Municipalities. 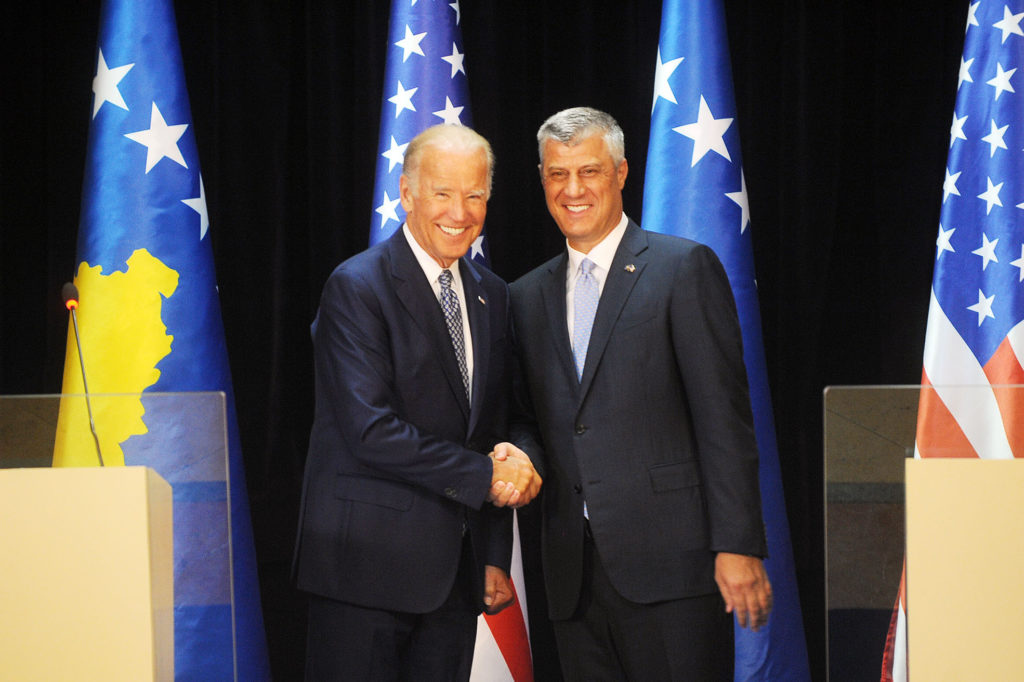 Vice-President Biden and President Thaci (Image by Office of the President of Kosovo/president-ksgov.net)

During a joint press conference with Kosovo’s President Hashim Thaci, Biden said the border agreement and the formation of the Serb Municipalities’ Union will have positive effects on the region. “I would like you to ratify the (border) agreement with Montenegro. It’s a fair deal, which will have a positive impact on the region, and so will the Union of Serb Municipalities. Some decisions need a little push, but hard decisions will always give good results.” Vice-President Biden said.

President Thaci noted the importance of the border deal with Montenegro and the Union of the Serb Municipalities by saying, “Without the ratification of the border deal, with and without the Union of the Serb dominated municipalities, which will be in accordance with our nation’s laws and Constitution, Kosovo will be isolated or abandoned by Brussels and the US. We cannot ask for help if we do not fulfill our obligations.”

While addressing Vice-President Biden, President Thaci said: “Mr. Vice-President, I’m entirely certain we will fulfill our state obligations, which are in the interest of Kosovo, the region, and our Euro-Atlantic future”. 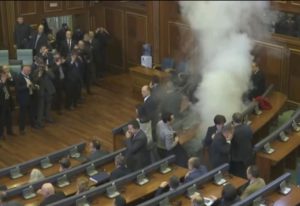 The Union of Serb dominated Municipalities, which will in fact grant more autonomy to Serbs in the western region of Kosovo, is related to the deal that Kosovo’s government made with the EU. Subsequently to the signing the deal with EU, Kosovo’s government submitted a bill related to the deal for a vote in parliament. On February 19th after much heated debate on the Union of Serb Municipalities, the MP of the Vetevendosje party –(who is the bill’s top adversary) released tear-gas in the parliament’s chamber – thus stopping parliament’s session.

Vetevendosje party (which means Self-Determination in Albanian), is against the border deal with Montenegro, arguing that its ratification will deprive Kosovo of 8,000 hectares of land.

The border deal with Montenegro is in fact the top public issue in Kosovo’s politics, dividing the political arena in to two rigid fronts – the coalition government, which signed the bill, and the opposition parties led by Vetevendosje party and Alliance for Future of Kosovo Party (AAK) who are trying to block it in parliament.

Border deal with Montenegro scheduled for vote despite Opposition’s blockade

After several months of the Opposition’s parliamentary blockade, the political struggle over border deal with Montenegro culminated on August 3rd during the parliament’s debate on the bill for ratification of the deal. Heated debate between Opposition MPs and government officials intensified the political crisis, which resulted in another tear-gas incident in parliament’s chamber, a bomb in house of the MP of the ruling party, Murat Meha, and an attack by a grenade launcher on the parliament building.

However, all those incidents have not slowed down the parliamentary procedure for the bill for ratification of the border agreement with Montenegro, as it was set for vote on September 1.

The border agreement with Montenegro is considered by the EU as a condition to grant Kosovo a visa-free travel regime; Biden’s call to Kosovo to ratify the agreement came after several calls by Montenegrin and EU officials.