BELGRADE, Serbia – On August 16, the US Vice President Joe Biden met with top Serbian officials in Belgrade. Downtown, demonstrators affiliated with the Serbian Radical Party welcomed Biden with banners that said, “We Don’t Want Biden, Trump is In Our Hearts!” and “Biden Get Out!”. 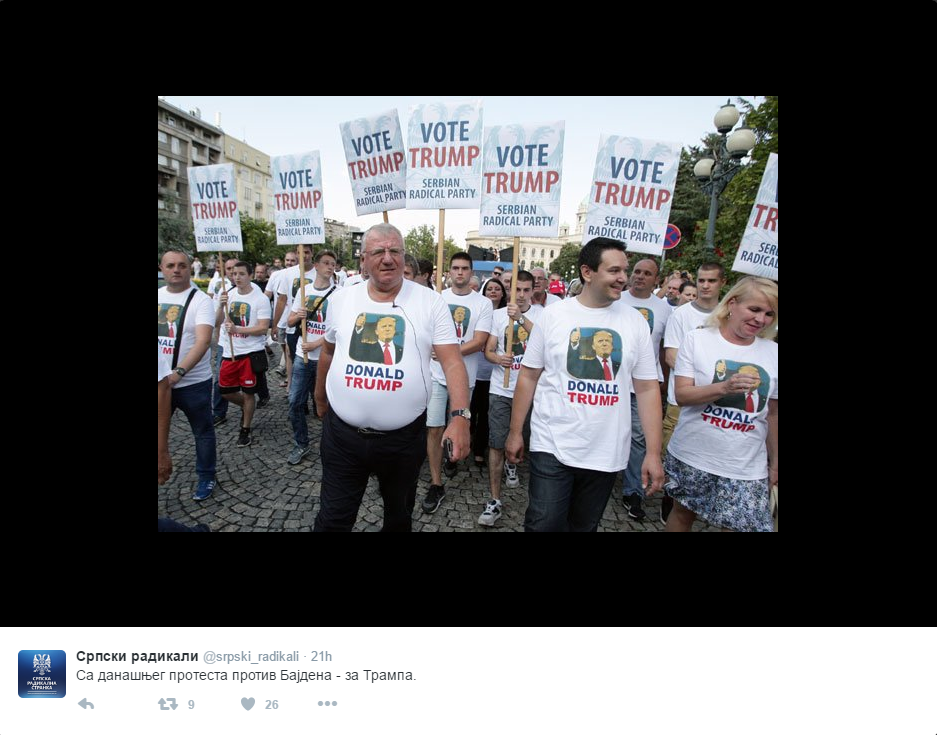 The US Vice President Joe Biden began the afternoon talks in Belgrade with top Serbian officials yesterday; after a welcoming ceremony at the Palace of Serbia, Biden met two delegations, and afterwards had a private talk with Serbian Prime Minister Aleksandar Vucic. Biden, with Vucic, in front of the Palace of Serbia, met the Minister of Foreign Affairs Ivica Dacic , Minister of Interior Nebojsa Stefanovic , Minister of Traffic Zorana Mihajlovic , Minister of Defense Zoran Djordjevic, and the Head of the Government Office for Kosovo and Metohija, Marko Djuric. The US Vice President completed his visit to Belgrade by meeting with President Tomislav Nikolic, after which he traveled  to Pristina, Kosovo.

Despite the warm reception US Vice President Biden received from the Serbian Government officials, the general public had a different opinion. There was even a protest organized by the Serbian Radical Party; the leader of the Radical party, Voislav Seselj, said that Biden is “not welcome in Serbia!”

The protest was not held in front of the Presidency building, as planned, but in front of the Belgrade City Assembly (Old Palace), since the police had set up a fence and prevented the protesters to approach the building.

Addressing the crowd, Seselj recalled Biden’s previous negative statements about Serbia, and said that the US Vice President is undesirable in Serbia, and that the people of this country will never forget that he was one of the advocates of the bombing and “kidnapping” of Kosovo and Metohija.

“Such a criminal; the killer of children, rapist, murderer, the aggressor and butcher, is here, again, and enjoys the state honors,” said Seselj, and added that Biden is an archenemy of the Serbian nation.

During the protest, Seselj called on all Serbs in the United States to vote for the candidate of the Republican Party, Donald Trump.

“Vote for Trump, vote for the future of Serbia,” he said. According to Seselj, Trump is one of the few who sought to apologize to Serbia.

“He’s a friend of Russia, and wants to agreements with Russia… Vote for him, as a friend of the Serbian people. Trump is the only one who can destroy all the backstage action. He can do it, and I am convinced that he will succeed… He is honest, honorable, brings peace, and pride to America.” said Seselj.

The crowd also carried placards in English, reading “Biden and NATO get out (exit Serbia)”.