On July 21st of this year, the Egyptian Foreign Miniser, Sameh Shoukry, visited Israel for peace talks about Palestine; it was the first time that the Foreign Minister had visited for this purpose since 2007. 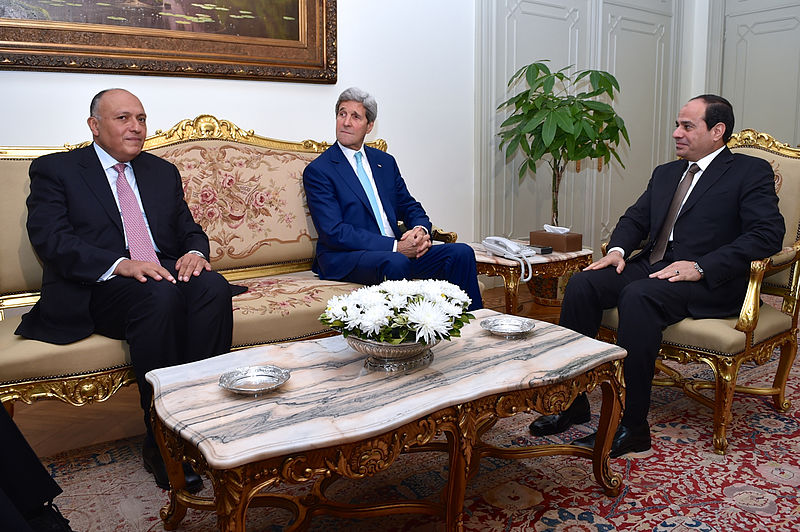 U.S. Secretary of State John Kerry and Egyptian Foreign Minister Sameh Shoukry sit side-by-side as they meet with Egyptian President Abdel Fattah al-Sisi at the Presidential Palace in Cairo, Egypt, on July 22, 2014, to discuss a possible ceasefire between Israeli and Hamas forces fighting in the Gaza Strip. (Image by US Department of State/US gov. work)

The meeting between Shoukry and Israeli Prime Minister Benjamin Netanyahu was held in Jerusalem, which came under controversy due to its symbolic message. The City of Jerusalem in the Israeli/Palestinian conflict is a point of contention; both believe the major holy city legally belongs to them. The meeting carried the implicit message of Egyptian recognition of Israeli sovereignty over Jerusalem, along with its status as the capital of Israel.

The meeting preceded a statement by President Abdel Fattah Al-Sisi of Egypt, who expressed wishes to mend the Israeli/Palestinian conflict, and to come to a resolution. He proposed to “widen the circle of peace” with Israel in order to mend relations with other Arab states, as well as with the Palestinians.

Former Egyptian Foreign Minister, Mohamed Orabi, clarified Egypt’s motives for reaching out to Israel to further peace initiatives. He states that Egypt “seeks to restore the Palestinian cause to the focus of Egyptian and regional interest once more, following years of neglect during the revolutions of the Arab Spring that erupted in early 2011, and [Egyptian] preoccupation with a succession of internal and regional crises.”

A specialist in Israeli Affairs at the Al-Ahram Center for Strategic Studies, Mohamed Gomaa, believes the renewed interested in conflict resolution has to do with Egypt’s own self-interests; hostility in the Sinai could result in a “potential fourth Israeli war on the Gaza Strip, as well as the consequences for the security of Sinai and Egypt more broadly.”

Orabi acknowledges that Egypt’s involvement will be met with hostility on both sides, stating that “solving the Israeli-Palestinian conflict demands a painstaking effort [due to] the many historical layers [of conflict] between the Israelis and Palestinians. Nor would those efforts necessarily be crowned with success, given the conflict’s complexity and the entanglement of regional and international powers in the conflict.”