Today, August 9, during a meeting of the Parliamentary Commission for foreign affairs in a Kosovo parliament building, opposition MPs released tear gas in protest of border deal with Montenegro. 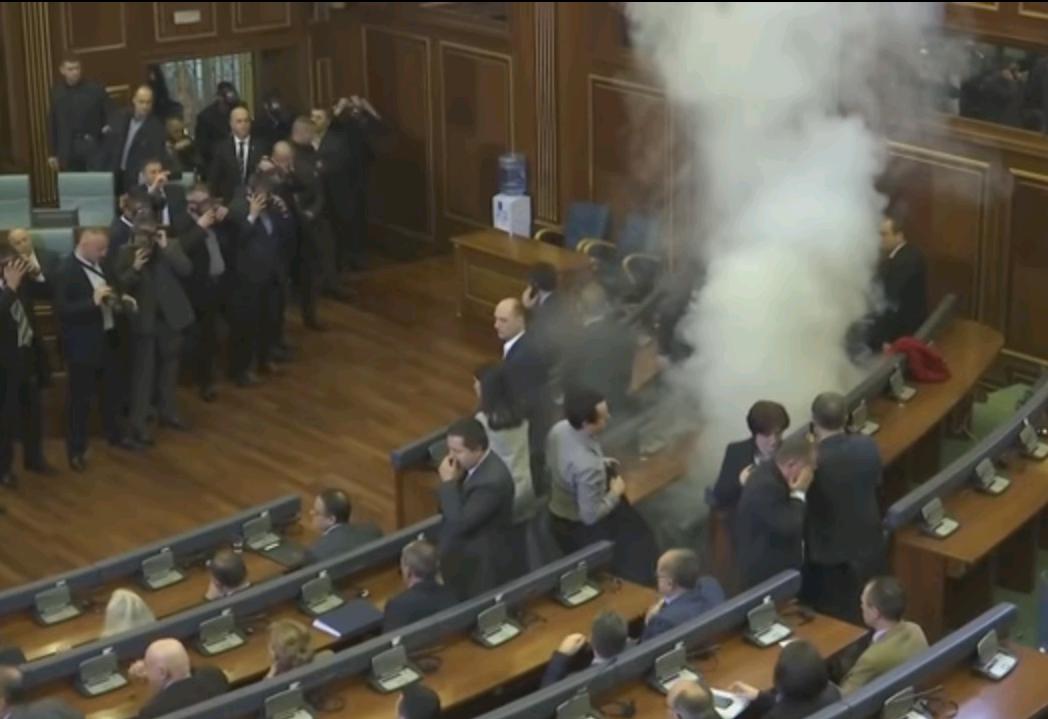 Tear-gas in Parliament in February of 2016 (Image: screenshot)

The Kosovo Parliament Tear Gas Incident — As we reported, Kosovo MPs engaged in a heated debate on August 3rd over a bill which ratifies a border deal with Montenegro. Opposition MPs claimed that the deal will deprive Kosovo of 8,000 hectares of land. Just a day after the heated debate on the border deal, on Thursday, August 4, the building of Parliament of Kosovo was attacked by a projectile from a grenade launcher. The attack occurred on Thursday night, just a day before the vote on the controversial and disputed border deal was scheduled for a vote in Parliament.

Two opposition parties, Vetevendosje, and the Alliance for the Future of Kosovo (AAK), are the top adversaries of the border agreement with Montenegro, and have been blocking it in the parliament since it was signed by Montenegrin and Kosovo’s governments.

The Anadolu agency reports that the Kosovo Parliament tear gas incident happened after the Commission’s majority declined opposition’s proposal to scrap the bill for ratification of the border agreement.

Today was not the first time Kosovo’s political fights resulted in tear-gas in the parliament, as it happened several times before, the most recent being on February 19, when opposition MPs stopped parliament’s debate on the government’s deal with the EU on Serb autonomy in Serb dominated municipalities.

However, Kosovo’s border deal with Montenegro strained ties between the government and the opposition even more.

A deal considered to be a pre-condition to grant Kosovo visa-free travel regime by the EU, was signed by the governments of Montenegro and Kosovo in 2015. While the parliament of Montenegro accepted the deal and voted to ratify it, Kosovo’s political players are split on the issue.

Kosovo’s opposition regards the deal as a “gift” of additional 8,000 hectares of land to Montenegro, arguing the government sold the nation’s interests to the other side.

Thr problem lies in the fact that a two-thirds majority is needed to pass the bill on the ratification of the border deal.