The building of the Assembly of Kosovo (parliament) was attacked on Thursday night by a shot from a grenade launcher, Police officials confirmed on Friday.

A spokesperson for the Kosovo police told the press that a projectile was fired from a grenade launcher onto building of the parliament, possibly form a moving motorcycle.

The police spokesperson confirmed that in the attack that occurred around 11 PM last night, August 4, that there were no casualties, and that the blast only caused material damages.

According to some news agencies, two explosions occurred last night near the parliament of Kosovo, however, the spokesperson for Kosovo police, Daut Hoxha, told the press that evidence was found at the scene of crime which will aid the police in finding the culprits.

“Remains of the grenade launcher, gas containers – Molotov cocktails were found. And in the Aktash quarter of Pristina, a burnt motorcycle was found”, Hoxha told to the press. 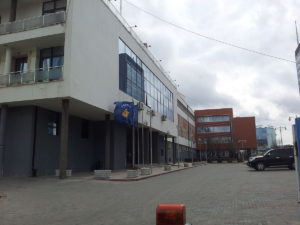 The building of the Assembly of Kosovo is located on a busy street in downtown Pristina. News media report police, KFOR and EULEX forces arrivied at the scene the after the blast and sealed off the area around the building.

The attack on Kosovo’s parliament came just a day after Kosovo’s MPs engaged in a heated debate over a controversial border deal with Montenegro, which Kosovo’s opposition, led by the Vetevendosje party, strongly opposes.

As ArmedPolitics reported on Wednesday August 3rd, Kosovo’s MPs debated on the controversial border agreement with Montenegro; two opposition parties, Vetevendosje (which means Self-determination in Albanian), and Alliance for Future of Kosovo party (AAK), are the top adversaries of the border deal, arguing that deal deprives Kosovo of 8,000 hectares of land.

The border agreement was signed by the government of Montenegro and Kosovo last year, and is considered as a condition to grant visa-free travel regime to Kosovo by the EU.

While the Montenegrin Parliament ratified the border deal, the Assembly of Kosovo did not, sparking several requests to do so from Montenegro.

During the August 3rd debate on the deal in Kosovo’s parliament, MPs of the Vetevendosje party left the chamber in protest when the President of Kosovo, Hashim Thaci, started speaking.

The attack on the parliament building happened just a day before the vote on the border deal was scheduled.

Tensions between the government and the opposition over the border deal with Montenegro are the culmination of a severe political crisis in Kosovo. The crisis was initiated by the governments deal with the EU to give Serb minority more rights and autonomy in the Serb dominated municipalities in the North regions of Kosovo.

That deal sparked outrage from the opposition, who organized mass protests. Opposition MPs even released tear-gas in the Assembly chamber during the parliament’s session as a protest over the government’s policies.