On August 4, the President of Turkey, Recep Tayyip Erdogan, announced that the Turkish government will go after all businesses linked with the Gulen Movement (called FETO/PDY by the government), as a post-coup measure. 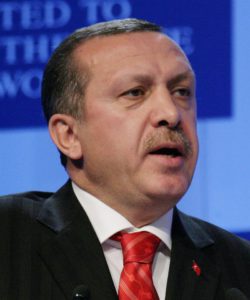 The July 15 military coup attempt initiated a response by the Turkish government in the form of three-moth long “state of emergency”, and the government crackdown of all institutions affiliated with Fetullah Gulen and his movement, who are accused of orchestrating the coup.

The government crackdown resulted in the arrests of judges, military personnel, government officials, and the shutdowns of media organizations; schools and educational institutions suspected of close ties with the Gulen Movement were also closed by the government.

Hurriyet Daily news reported Erdogan’s comments on the closure of schools: “Every school, every private education institution belonging to this (Gulen) movement is a terror nest.”

While attending a meeting with member leaders of Turkish commerce, Erdogan noted that the Turkish government is determined to “cut off all FETO/PDY connections in the business world.”

Erdogan warned all financiers of the Gulen movement that they will not be spared, even if they were not directly involved in the military coup attempt. Erdogan described financing the Gulen movement as ‘buying bullets which will be fired against the Turkish nation’.

The latest of Erdogan’s comments are the continuation of the increasing range of the government’s crackdown, which is the nation’s response to the military coup. While the crackdown began as the purge of “Gulen’s parallel structure” within government institutions in the form of arresting soldiers, judges and government employees suspected of having ties with Gulen, it quickly spread to non-government institutions, schools and media organizations. The crackdown was followed by controversial statements by Turkish officials who announced reinstating the death penalty.

All parliamentary parties demonstrated unity against the coup, and even showed support for the government’s request to the US for the extradition of Gulen to Turkey.

While the ruling party, AKP, has for some time been trying to impose a “presidential” system in Turkey, the opposition parties blocked debates on such a huge constitutional reform. However, the post-coup political discussions in Turkey seem to be more favorable for AKP’s proposal.

Today, after commenting on private businesses linked with Gulen, Erdogan repeated his previous calls for constitutional reform; he argued that Turkey is weak while governed by 1950s laws and laws made after successful coups.

Recently, even Prime Minister Binali Yildrim called all parliamentary parties to engage in a fruitful discussion of constitutional reform.

The ruling Justice and Development Party (AKP) recently announced a pro-democracy rally to be held on Sunday in Istanbul. Erdogan invited the leader of the largest opposition party, CHP, to attend the rally, while the leader of the right-wing MHP party already announced his attendance.

The unity of all Turkish parliamentary parties mostly revolves around united stances against the coup, however, they differ on the government’s post-coup measures. The pro-Kurdish HDP party was the only parliamentary party not invited by Erdogan to the meeting in his palace on July 25.