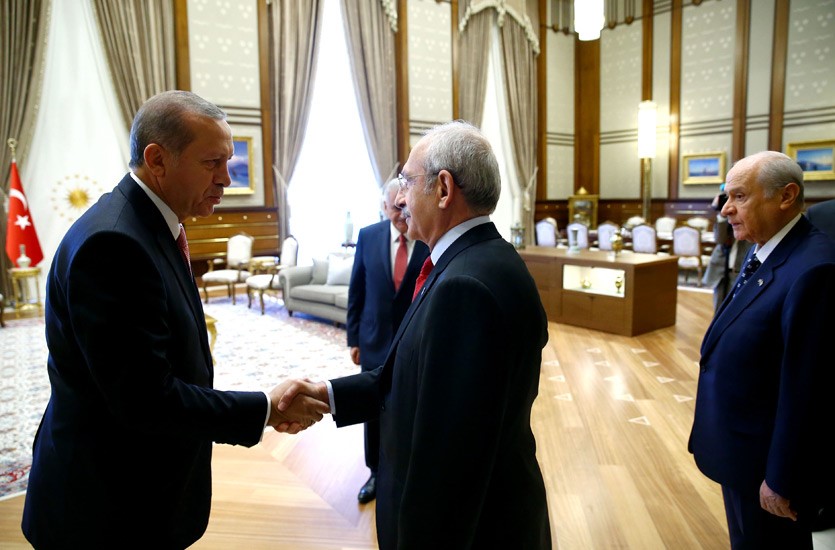 Erdogan and Kilicdaroglu at the Presidential Palace (Image by tccb.gov.tr)

As we reported yesterday, Erdogan held a historic meeting in his Palace with two out of the three opposition parties leaders. Although all parliamentary parties denounced the military coup attempt, and expressed their support for democracy in a rare join statement in parliament just day after the coup, the pro-Kurdish Peoples’ Democratic Party (HDP) was not invited to the meeting.

However, today it was reported that the Turkish president has decided to withdraw all lawsuits against opposition leaders as a sign of solidarity.

The meeting in the Presidential Palace 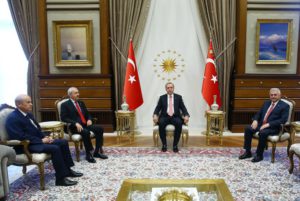 Meeting at the Palace (Image by www.tccb.gov.tr)

The meeting in the President’s palace reportedly had only one topic: post-coup measures. While all parties have condemned the coup, they differ on the methods and actions on how to solve the post-coup crisis.

The main opposition party, Republican People’s Party (CHP ),criticized the government’s decision to impose a three-month long state of emergency. On the other hand, the Nationalist Movement Party supports the state of emergency, and has announced support of reinstating the death penalty. The pro-Kurdish Peoples’ Democratic Party (HDP) recently stated it will not support bringing back the death penalty.

Lawsuits against the opposition leaders in Turkey

Before the coup attempt, Turkey was an arena of an intense political struggle between Erdogan’s Justice and Development Party (AKP) and three opposition parties, which often resulted in votes on controversial laws in parliament, lawsuits, and harsh accusations.

In May, Grand National Assembly (Turkish parliament) passed a controversial law that stripped many opposition MPs of their immunity.

According to the Turkish law, insulting the President is a criminal offense, and so far many public figures faced criminal charges.