It seems that not a day has gone by over the last few weeks without an ISIS-affiliated or inspired attack in France or Germany. To some extent, this is because the ISIS narrative has given license to those who want to express their frustration with the world through violence, and does not require the group even to act. However, this ‘spill-over’ effect is arguably heightened by ISIS’ greater strategic focus on these countries. 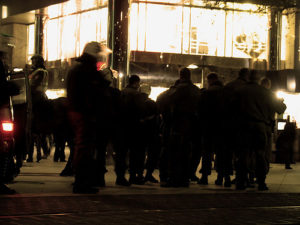 But if this is the case, why does ISIS focus more on these countries in particular, as opposed to say the UK? France and Germany have the largest Muslim populations of any Western European country, representing the largest minority communities in their respective countries by significant margins. For both countries, these communities are their contemporary archetypal ‘other’. Both are experiencing increasing right-wing resurgences who are deploying Islamophobic rhetoric.

France’s North African-origin community, which makes up at least 10% of the country’s population; while they’re not necessarily all Muslim, they often all face the same discrimination, and have a complicated relationship with the state. France’s far-right has long engaged in scaremongering up the idea of a Muslim insurrection.

Germany’s largest minority group, by a huge margin, is its Turkish community. Now with an influx of Syrian refugees, numbering as many as one million, the German far-right has been playing on a similar theme to that in France. The UK, while it has seen a stark increase in Islamophobic rhetoric and actions, has a relatively much smaller Muslim community, compared to other minority groups in the country; this is not to say it is not a target.

ISIS is seeking to fuel the rhetoric of the far-right in France and Germany. In doing so, it hopes to engender a racist backlash against Muslim (or perceived as Muslim) communities in both countries. This would play into ISIS’ narrative of a war between Muslims and the West, and it would use this in its recruitment activities. Moreover, it would propel ISIS’ global strategy of inciting chaos and societal instability, ultimately leading to societal collapse, leaving a tabula rasa upon which it can build a new world order.