President of Croatia, Kolinda Grabar Kitarović, announced today that the early parliamentary elections will be held on September 11. 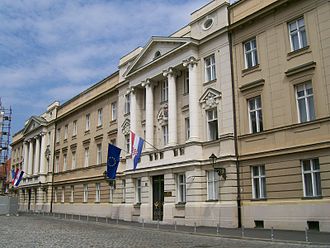 Yesterday, the Sabor, (Croatian parliament) was officially dissolved, following the vote of the Croatian MPs on June 20 about the dissolution of the parliament to take place on July 15. Out of 151 MPs, 137 voted in favor of the motion to dissolve the parliament.

The 8th Parliament of Croatia since the nation’s independence lasted only 10 months. The Croatian parliamentary election, held on November 8, 2015 resulted in a “hung parliament”, negating a clear parliamentary split to both of the two largest parties – Social Democratic Party (SDP) and Croatian Democratic Union (HDZ).

2015 election results marked the start of a severe political crisis in Croatia. The coalition government, which was formed by HDZ and the Bridge (Bridge of Independent List) was on shaky ground from the start; civil protests, accusations by the opposition, the resignation of the Vice-Prime Minister Karamarko, and the impeachment of the Prime Minister Orešković preceded the dissolution of the parliament.

The 8th Croatian Sabor had a poor legislative record, and had only 56 days of effective work.

The early parliamentary election, announced by the President to be held on September 11, is in fact the conclusion of the Croatian political crisis. The two major Croatian parties – SDP and HDZ, are the top contenders to win.

However the recent resignation of HDZ chief Tomislav Karamarko left HDZ in the process of finding a new leader. So far, the only candidate to succeed Tomislav Karamarko is Andrej Plenković, MEP. Today’s statement by the HDZ officials indicate that Plenković will be named president of HDZ on Monday.

The Social Democratic Party of Croatia, on the other hand, had its party election on April 4, 2016, which resulted in re-election of Zoran Milanović, former PM of Croatia. SDP claims it will win the early parliamentary elections.