Afghan President Ashraf Ghani, and Chief Executive Abdullah Abdullah, were part of the summit; “Leaders from Resolute Support partner countries at the Warsaw Summit have reaffirmed their commitment to the long-term security and stability of Afghanistan”, said the NATO secretariat in a press statement. 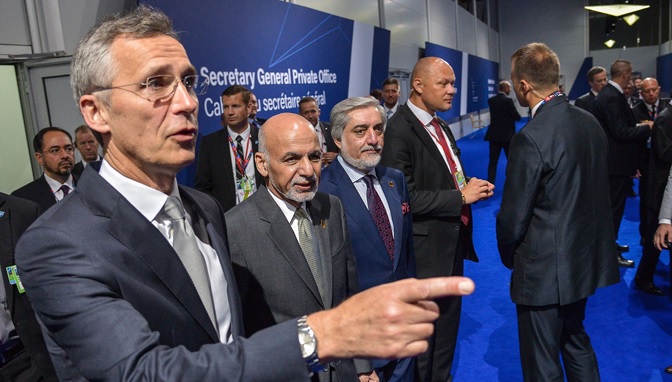 The Afghan National Defence and Security Forces were discussed in the meeting and ways to support Afghanistan were proposed.

“Afghan security forces are now responsible for security across the whole country,” NATO Secretary General, Jens Stoltenberg said. “They are defending the Afghan people with dedication and courage; we continue to train, advise and assist them; but Afghanistan still faces serious instability and violence; so our continued political, military and financial engagement is of great importance.”

Mr. Stoltenberg highlighted three key decisions made. “First, we agreed to sustain our Resolute Support Mission beyond 2016, through a flexible, regional model. Second, we received firm national commitments to continue funding Afghan security forces through 2020. And third, we reaffirmed our support for a long-term political partnership and practical cooperation with Afghanistan,” he said. “So our message is clear: Afghanistan does not stand alone, and we are committed for the long haul.”

“We thank political leaders, generals, and officers, and the men and women who have fought shoulder to shoulder with us. We thank the taxpayers and the civilians from your countries who have dedicated their lives to helping us recover from the estimated $240 billion of economic losses inflicted on us by invasion and conflict”, Ashraf Ghani told the summit. “The combat role of NATO in Afghanistan is over for good.   Our confidence is derived from our national resolve, and the constructive partnership between our National Unity Government and NATO.”

The Taliban Supremo “Amir-ul-momineen”, Sheikh Habatullah Akhundzada, released his statement on the eve of Eid ul Fitr. “Afghanistan is occupied by invaders. Therefore, Jihad is an obligation to drive out the invaders. But, the Islamic Emirate has a clear political policy aimed at ending the occupation, establishing an independent and united country, and bringing about a sacred Islamic system”.