Armed men killed 20 hostages in a café in Dhaka; the deaths of the hostages was confirmed by a Bangladesh army official in his briefing to the media. The Islamic State claimed responsibility for the attack, and released photos of the executed bodies inside the restaurant through social media. 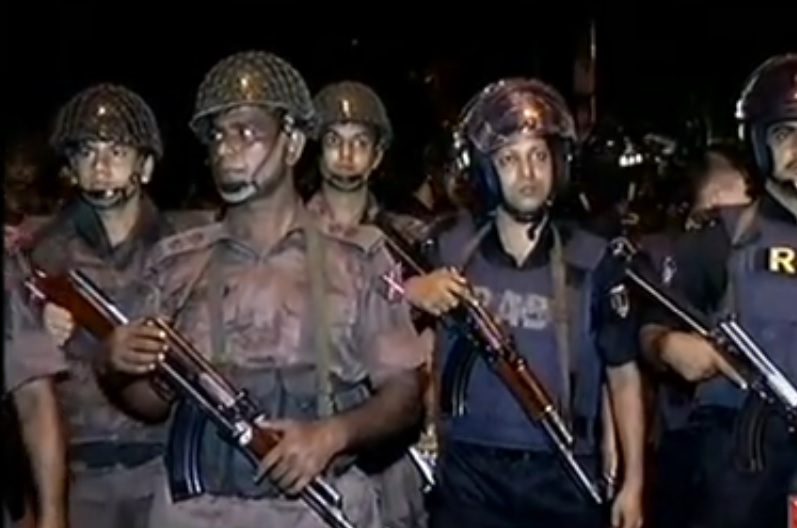 The militants had taken foreign civilians hostage earlier in a café in diplomatic zone of Dhaka; the hostages death was confirmed by Bangladesh military official, Brig General Nayeem Ashfaq Chowdhury.

Six of the armed men were killed, and one captured alive, confirmed Sheikh Hasina, the Bangladesh premier.

The Indian Minister of External Affairs, Sushma Swaraj, confirmed the death of the Indian citizen in the Dhaka attack via Swaraj’s Twitter account, and stated that Tarishi was a teenage Indian who studied in American School in Dhaka, and was a current student at Berkeley.

I am extremely pained to share that the terrorists have killed Tarushi, an Indian girl who was taken hostage in the terror attack in Dhaka.

Police elite forces who stormed the café to rescue the hostages, resulting in the rescue of 13 individuals, including a Japanese and two Srilankans.

Dhaka Update: 2 #SriLankan nationals among rescued hostages. SL High Commission official has met them and they are unharmed and safe.

One Japanese national has been rescued, but contact to seven other hostages has not been made possible, Deputy Chief Cabinet Secretary Koichi Hagiuda told the media.

The number of Italian hostages has not yet been confirmed by Bangladesh government, as officials are still struggling to confirm the identities of the decesased.

Bangladesh remains an unsafe country for bloggers, social and rights activists, gays and atheists, as it has been for the last two years. Nearly two dozen writers, publishers, atheists, minority groups’ members, foreign aid workers and civil society members have been killed in Bangladesh since 2013.

The frequency of attacks increased after the country executed the well-known leaders of the religious party connected to the civil war crimes in the 1970s when Bangladesh parted ways with the then-Pakistani government.

The government officials do not confirm the presence of Islamic State in Bangladesh, but several attacks are claimed by said organization.