One of this week’s big stories in Nigerian politics is forgery of “Standing Order of the Senate” by their leadership. Those allegedly responsible for the doctored papers were Senate President Bukola Saraki and his deputy, Senator Ike Ekweremadu.

To begin with, the impact of forgery in any political system is that it gives gains and benefits to unmerited and undeserving individuals, benefits that could not have been obtained through a legal and level playing ground. This simple explanation shows why political scientists view ‘forgery’ as a vile act and corrupt practice in itself. It is far more injurious to social welfare advancement than its ilk: bribery, money laundering, project cost inflation and acute cronyism.

It is quite astonishing to many that despite the fact that APC (All Proressives Congress, the governing party), coasted to victory on the horseback of change, there has been little definitive change and improvement, but rather continuing dubious governmental acts-proof of the non-existence of party ideology in Nigeria, and by extension in Africa. 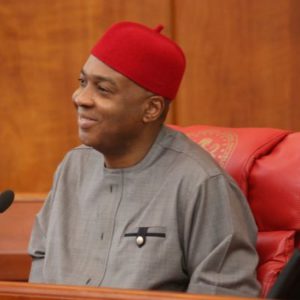 There used to be a popular phrase in party politics: Party Supremacy. Non-adherence to such principles have recently created factions and fractions within leadership of the ruling party in the Senate, the country’s upper legislative chamber. It is pertinent to note that inter-party divisions, or what Thomas Berger called ‘party internal caucus’,  serve to impede national progress.

Bukola Saraki emerged as Senate President (automatically by virtue of the Senate for being the senior chamber), Chairman of 8th National Assembly in deference to party consensus; he was elected by quorum of sitting members. Proving to be the worst case scenario, his deputy also emerged from the opposition PDP, in what appeared unprecedented since the rebirth of democracy in 1999. The party, which constitutes the majority in legislature, has since been occupying both offices.

In a June 29, 2016 press interview of Senate Committee on Media & Publicity, the Chairman, Senator Aliyu Sabi Abdullahi was quoted as saying “The executive is in no position to determine what are the correct Standing Orders of the Senate. The Senate President and his Deputy were, on the morning of the June 9, 2015, at the inauguration of the Senate and Senators-elect, and could therefore not have been in a position to influence any alterations in the rule book.” Such support is necessary given that any pains inflicted on Saraki are pains inflicted his caucus members, and in turn, stains on the Senate chamber as a legislative institution.

This assertion was reaffirmed when Senator Bukola Saraki himself, on June 27, 2016, succumbed by stating: “If yielding to the nefarious agenda of a few individuals who are bent in undermining our democracy and destabilizing the federal government to satisfy their selfish interests is the alternative to losing my personal freedom, let the door to jail be thrown open and I shall be a happy guest.”

It seems glaring to Saraki that specific factions within the ruling party are currently pursuing a winner-takes-all agenda.

With other developing forgery-related issues like fake tax clearance certificates, which prompted the dismissal of Abia State Governor Okezie Ikpeazu on June 28, 2016,  the simmering debate about the authenticity of President Muhammadu Buhari’s 1961 high school diploma, and the discussed Senate’s Standing Order scandal’s (analyzed in this column), the quest for qeniune proof of education and qualifications is relevant, necessary, and imperative.

It is going to take a long while for Nigerians to absorb the impact and digest this new development: Forgery. My worry is that the major price of this dishonesty will be paid by the lower class citizens.