A Kabul suicide bomber hit vehicles carrying police recruits, killing 27 and wounding 40 others; cadets were in vehicles after attending a graduation ceremony in Wardak province.

Afghan President Ashraf Ghani called the Kabul attack “an act against humanity” in his statement released by his office. President Ghani has called the attack “a sign of defeat” of Taliban in the battle field. 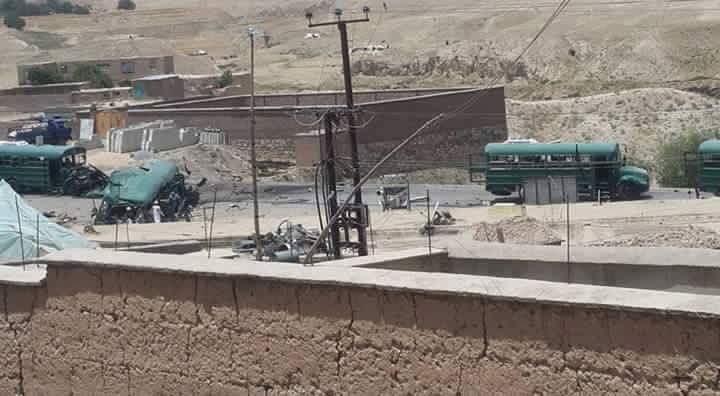 The site of the attack in Kabul, Afghanistan [Facebook Courtesy Photo].

“By committing this criminal act, Taliban revealed more than ever their callous & merciless nature”, said Ghani.

President Ghani has directed the Ministry of Interior Affairs to probe the “decision on the transportation of cadets”. The Afghanistan Ministry of Interior Affairs spokesperson Sediq Seddiqi confirmed the attack in a tweet from his account. A Taliban spokesman claimed the attack, “Police academy bus carrying 27 officers initially targeted by martyrdom seeker in Company area of the country’s capital Kabul”.

Hashem Dadvar, a resident of Kabul, told ArmedPolitics, “I heard the blasts.  They were heavy blasts, one after the other”. This attack followed the earlier suicide attack on the Canadian embassy security staff, killing at least 14 Nepalese individuals in Kabul.

Afghanistan National Security Forces have launched country-wide operations that have reportedly killed hundreds of Taliban and Islamic State militants in different provinces. Taliban attacks are on the rise after the international community pledged it’s support for the Afghanistan fight against terrorism.

Hekmatullah Azamy, a Kabul-based researcher, told ArmedPolitics, “The Taliban’s biggest fear is of well trained police like those  who were attacked today. With such attacks, they want to discourage the Afghan people from joining the Afghan National Security Forces ranks”. He wanted to impart the fact that the Afghan authorities have to learn from such attacks. “They [Afghan Authorities] should be blamed as well for not taking the appropriate measures and precautions to prevent these attacks”.