Pakistan is left alone by International Community in the fight against terrorism. Pakistan has a long history working for peace, whether it was the USSR invasion of Afghanistan, the ‘war on terror’ after 9/11, countering Al-Qaeda and other terrorist organizations, according to Asim Bajwa, the Director General Inter Services Public Relations of Pakistan, in an interview with DW-Urdu service.

Pakistan’s federally administered tribal areas (FATA) was a hub for terrorism and plans were made and then executed across the country by terrorist organizations whether they were Tehreek e Taliban Pakistan, Al-Qaeda and others. 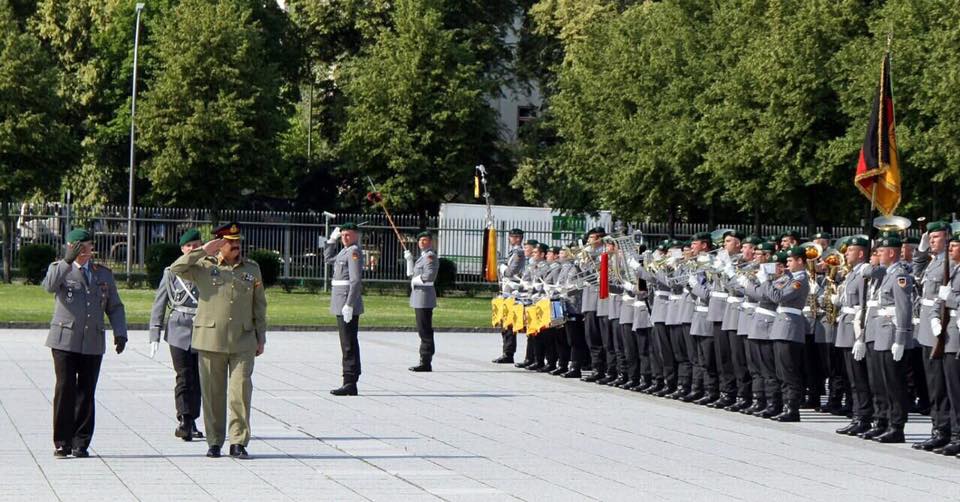 General Raheel Sharif while receivig guard of honor in Germany, while on his visit to the country [Photo by ISPR]

“To date, 18,000 operations are launched across Pakistan, in which 240 terrorists are killed, now one can understand how deeply they [terrorists] are hidden”, told Bajwa. “We were speedy in clearing North, South Waziristan and Khyber Agency from terrorists and completing repatriation 62% of the displaced population, providing them development projects”.

Pakistan is “optimistic for peace talks of the Quadrilateral Coordination Group” but the death of Mullah Mansour [the Taliban chief] by a US drone strike was a shock for the peace process, he told.

Analysts take the view that Pakistan is being singled for having discrimination among terrorist groups on its soil, those who are used as “strategic assets” are never touched in the Zarbeazb operation. Human Rights groups and social activists questioned media access for reporting Pakistani army operations earlier in the year.

“Unfortunately, this is another army ruse to convince Pakistanis that their country and their army is being maligned by the international community. If Pakistan is being abandoned, it is not because the United States and others are unreliable; after all the United States has stood by Pakistan for some fifteen years despite the fact that Pakistan has used its proxies to kill American troops and their allies in Afghanistan and undermine just about every U.S. national security interest in the region since the United States and Pakistan renewed security ties in September 2001”, C. Christine Fair, associate professor at Georgetown University’s Security Studies Program, told ArmedPolitics.

What has happened is that the “United States taxpayers and their congressional representation are tired of continuing to pay Pakistan exorbitant fees to do what sovereign states should do: secure their citizens from the ravages of terrorism”. And the Pakistani Taliban are the direct result of the numerous Deobandi militant groups that the army has cultivated over numerous decades. They are not the product of a “CIA-RAW-Mossad sazish [conspiracy] as Pakistanis are routinely told”. Moreover, Americans are exhausted with continuing to bribe Pakistan’s army to partner with the United States, Afghanistan and NATO forces when it continues to support the Afghan Taliban and their allies to destabilize Afghanistan and continues to support a zoo of Islamist militants to kill innocents in India, Fair told.

“The international community is exhausted with Pakistan’s continued and reckless pursuit of tactical nuclear weapons because they increase the risk of non-state actors acquiring them. Many Americans are fully aware of the communal and sectarian killings as well as brutalities against the Baloch that are increasing in Pakistan as a result of state action and inaction”. In short, these are policies that the Pakistan army and its henchmen in the ISI have pursued and will continue to pursue. “If Pakistanis resent the isolation they are about the confront, they have only the army and the ISI it controls to blame”, she told in an online interview with ArmedPolitics.

“Pakistan continues to harbor Afghan Taliban and Haqqani Network till this day. It is plain disingenuous of Gen Bajwa to claim that the world abandoned Pakistan after the country has received boatloads of US money to help fight terror” told Dr. Muhammad Taqi, a US based political analyst who keep a close view of the Pakistan Afghanistan affairs and militancy in South Asia region, in an interview with ArmedPolitics.

“Pakistan has opted to create and protect jihadists against the world’s criticism, a path that leads only to diplomatic isolation and self-harm”.

Pakistan cannot expect to continue harboring Taliban and receive the US largesse simultaneously; it has to choose one, told Dr. Taqi.

“We have lived peacefully for centuries, the terrorists from across the globe were stationed in our regions with an aim to invade Afghanistan and disturb International Community busy in rebuilding post-Taliban Afghanistan”, says Khubeb Wazir, a resident of North Waziristan, now study in a government university at Peshawar. “Our people were slaughtered, jirgas [councils] bombed, homes razed to the ground are memories of our generation, without the will of Pakistan powerful establishment none of the terrorists would have come to our region”.

Being interviewed by ArmedPolitics, Wazir told the game of creating terror groups and bombing both Afghanistan and the regions on the Pakistani side of the Durand line were results of the “wrong policies” the government particularly the country’s powerful establishment had named “strategic depth”.