The referendum in Venezuela is a right established by the Constitution. Article 71 states that matters of special national transcendence may be referred to a consultative referendum. These matters include, as affirmed by article 72, every office elected by popular vote. The Constitution only regulates part of the process, leaving the rest to the consideration of the National Electoral Council (CNE in Spanish). Constitutionally, signatures must be collected from 20% of the electoral pool in order to activate and apply the referendum. 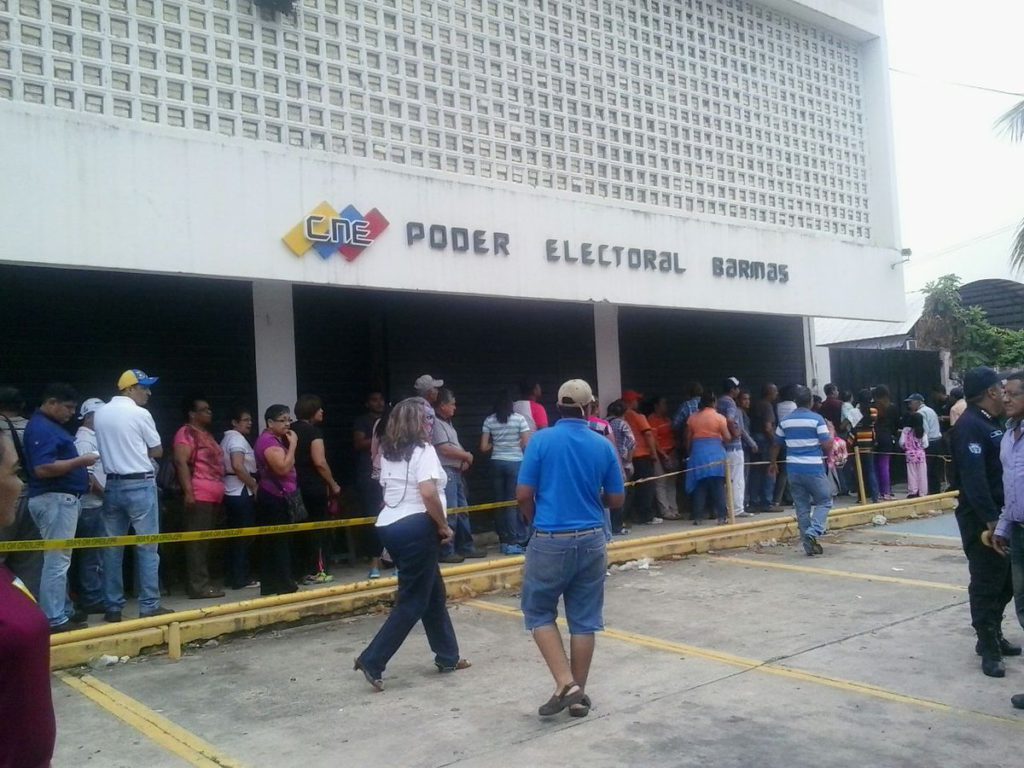 Citizens of Barinas in line to validate their signatures. (Image by @RevocaloYa, via Twitter)

However, the CNE added some steps. The first is that signatures must be collected from 1% of the registered voters, indicating that they want the process to take place. According to “El Universal”, said 1% is equal to 195,721 signatures nationwide. This phase of the process started on April 27th and the opposition had a total of 30 days to collect the signatures. “El Nacional” states that the Democratic Unity Table (MUD in Spanish), which is the alliance of the political organizations that oppose the current government, collected over 600,000 signatures on the first day. The CNE, which is in charge of validating the signatures, argued that they would not start the validation process until the 30 days they had granted passed. Opposition leaders such as Henrique Capriles Radonski and Carlos Ocariz accused the CNE rectors, via Twitter, of delaying the process for their interest, since they are known to be in favor of the current administration.

According to “El Nacional”, the CNE rejected 605,727 signatures for various reasons. Among the signatures that were eliminated was opposition leader Henrique Capriles Radonski’s. However, the amount needed was still obtained.

The second step added by the CNE was the personal validation of the signatures that were admitted. For this, every citizen whose signature was accepted has to go to the CNE headquarters where they are registered between June 20th and 24th.

After this validation process, according to constitutional lawyer José Vicente Haro on “El Nacional”, the next step would be to collect 4 million signatures in three days: the 20% established by the Constitution. Obtaining these signatures would, in theory, activate the process in which the CNE has three days to verify the signatures and to set a day within the subsequent 90 days for the referendum.

Finally, to revoke the president, it would be necessary to obtain an equal or higher amount of votes than those achieved by the president during his election; this would amount to 7,587,532 votes. It is not bold to assume that the referendum would be successful considering that, in 2013, opposition candidate Henrique Capriles Radonski obtained 7,270,403 votes and Maduro’s acceptance has dropped significantly since then.