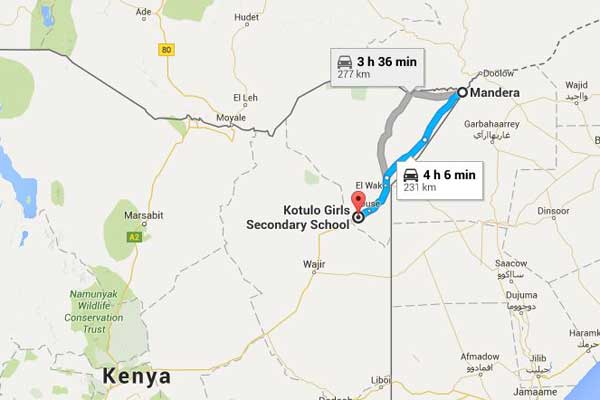 Al Shabaab has claimed credit for a deadly attack on Kenyan police convoy at Mandera county near Somalia border on Monday morning, killing five officers and wounding four others, some seriously.

“Thanks God, we carried out an ambush on the enemy today and they lost five police officers, while four others have sustained injured in the attack on police vehicles,” said Al Shabaab spokesman.

He said Today’s attack was the beginning of their Ramadan attacks in Kenya.

The attack began with a rocked propelled grenade (PRG) that burnt a police vehicle convoy, followed by hours-long gun-battle between the militants and Kenyan police forces.

Meanwhile, the governor of Mandera county has confirmed the attack, saying it could be prevented if the security forces would have taken early warnings of possible Al Shabaab attack in the area from the local residents.

“We condemn the attack by Al Shabaab at Dimu this morning five police officers killed. The info about their presence was long shared by the locals,” Mandera County Governor Ali Roba said on his Twitter account.

The Mandera county governor Ali Roba says Monday’s Al-Shabab “reverses the gains made” against the Al Shabaab group, admits that there is a security lapse.

Since Kenya sent troops in Somalia in Oct, 2011, Al Shabaab has carried out numerous deadly attack in Kenya, including Westgate shopping mall and Garissa University which left more than 200 people dead.