A bomb blast targeting a minibus killed 14 Nepalese security contractors in Kabul the Afghan capital. The blast wounded at least eight others including Afghan civilians. The security personnel were working in the Canadian embassy in Afghanistan.

Hours later another blast killed eight civilians and wounded at least 18 others in the northern Badakhshan province, when a motorcycle loaded with explosives blasted in a busy market. 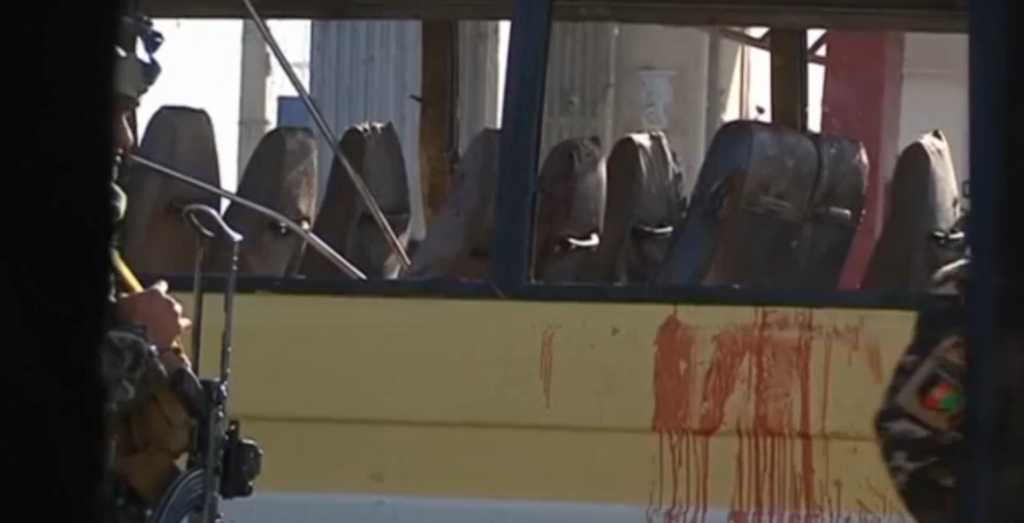 Minibus after the attack on Nepalese security contractors in Kabul (Image: Screen shot of the video, published on Reuters)

The spokesperson for the Ministry of Interior Affairs of Afghanistan, Sediq Sediqqi confirmed the deaths of 14 people in the attack and wounding of 8 others. He stated that the police is investigating the identities of the victims.

.@CanEmbAFG confirms that today’s cowardly attack targeted our security company. Our thoughts with families and friends of victims.

The Taliban spokesman claimed the responsibility of the Kabul attack. In his statement to the media organizations he said that “a martyrdom seeker of Islamic Emirate targeted a minibus carrying guards of foreign invaders in Banaie area, PD9 of Kabul city”.

Mujahid distanced from the second blast and stated that Badakhshan blast has nothing to do with “Mujahideen”—Taliban fighters. No other group has yet claimed the attack.

The Afghan Chief Executive Abdullah Abdullah condemned both of the bomb blasts and called them act of terror and violence against the people of Afghanistan. “Enemies have lost the fight against brave #ANDSF & now hides their defeat by targeting unarmed civilians across the country.3/3 #Badakhshan”.

This attacks adds to the one earlier in #Kabul & both of them r exmaples of atrocity, terrorism&violence against our people.2/3 #Badakhshan

The militant activities have increased across Afghanistan foreseeing the withdrawal of Western forces from the country since 2014.

Conflict analyst and author Aqil Yousafzai told ArmedPolitics that such attacks across Afghanistan, particularly, in the capital of the country shows that the new Taliban chief, Maulavi Haibatullah, would show his organization’s strength and muscle. “Operations against Taliban and Islamic State across Afghanistan escalated, so in a reaction Taliban would show their own power by suicide attacks”.

This has caused an increase in the internally displaced persons across the country, reported, in the Amnesty International Report on Afghanistan.