According to a statement by the Ministry of Defense of Afghanistan 24 were killed in different provinces, including 13 Islamic State militants, . 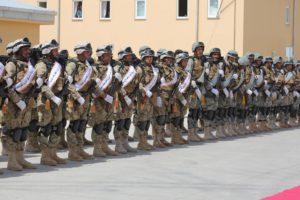 In Nangarhar’s “Achin district 13 Islamic State militants were killed and one injured”, states the Ministry of Defense of Afghanistan. “Five personnel of the Afghan National Army”  were also killed in the operations against militants in different provinces.

24 hours earlier, the Ministry of Defense had stated that 60 militants were killed all over the country, including two Al-Qaeda operatives .

The Ministry of Interior Affairs of Afghanistan has announced to have arrested Qari Zahir, the “military supplier” of Baghlan province from a vehicle when he was on his way to Kabul for treatment. Zahir was injured in combat days ago. “Afghan National Police arrested Taliban military supplier named Qari Zahir along with two other armed Taliban in Doshi district of Baghlan province”, according to a statement released by Ministry of Interior Affairs.

Earlier the Taliban shadow governor for Ghazni province Maulavi Muhammad Qasim Samim was announced by the Ministry of Interior Affairs to be “killed”. A Taliban spokesman has rejected the shadow governor’s death in a voice message to media (not verified independently).

The Taliban boosted their militancy across Afghanistan after the death of their supremo Mullah Akhtar Mansoor in a US drone strike in the Pakistani province of Balochistan. It can be assumed that he was on his way back from Iran, since his Pakistani passport had a valid visa with a return stamp from Iran.

Mansoor was believed to be a hardliner who did not let his organization to be part of the peace talks with the Afghan government. This led to a volatile situation across Afghanistan.

After the death of the Taliban chief counter terrorism has become more difficult in Afghanistan and across the region.

The Washington Post states that “At a NATO summit in Warsaw that begins July 8, the United States and its allies will try to raise $15 billion to fund Afghan security forces through 2020”. According to the paper “$10.5 billion” would come from the United States alone for the pays and clothes, fuel, weapons, and ammunition to combat Taliban insurgents.