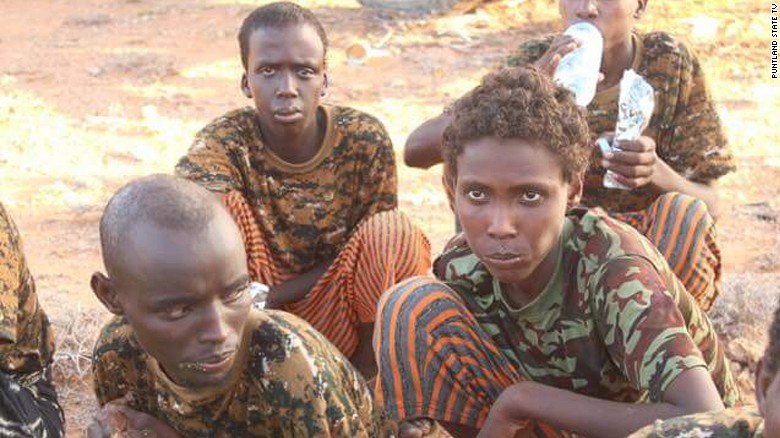 GAROWE, Somalia — A regional military court in Garowe town, northeast of Somalia has sentenced 43 Al Shabaab child soldiers to death penalty on Saturday for taking part in a seaborne attack on Puntland state in March, 2016.

Abdullahi Hersi, the attorney general of Puntland, a semi-autonomous state in northeast of Somalia said the defendants were found guilty of being members of Al Shabaab and partaking in the deadly attack in March.

Meanwhile, a senior Puntland army official who spoke to ArmedPolitics on a condition of anonymity said the sentenced members include under aged boys who have been brainwashed by Al Shabaab.

“Today (Saturday 18, 2016) the Puntland military court has given death penalty to 43 Al Shabaab elements over their role in recent attacks in the coastal towns of Gara’d and Suuj,” said Abdullahi Hersi, the attorney general of Puntland.

The children, in their teenage state were not given access to lawyers and have been sentenced to death and will face executions by firing squad of Puntland armed forces, according the sources.

Some of the children, who spoke to the media before the court ruling, said they were taken on their way to school, indoctrinated and forced to fight by Al Shabaab, the Al Qaeda-linked militants based in Somalia.

“These were children. Many of the Al Shabaab fighters captured by Puntland troops in the battle did not look as though they’d seen their 13th birthdays. They want to be rehabilitated not a death penalty,” said a Child rights activist in Puntland who spoke to ArmedPolitics by phone.

In March, Puntland forces and Al-Shabaab have battled on the Indian Ocean shores, killing more than a hundred of fighters and 20 regional army soldiers. Puntland is still holding nearly 100 Al Shabaab child fighters as prisoners of war.