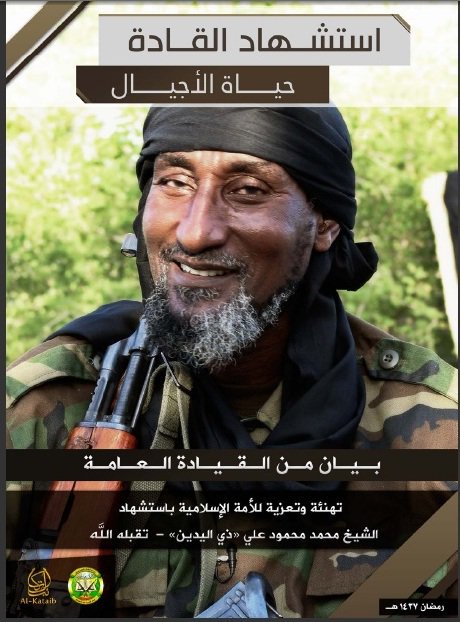 Al Shabaab mourns death of Kuno who was killed US airstrike in June 1, 2016.

MOGADISHU, Somalia — The Somalia-based, Al Qaeda-affiliated, Islamic group of Al Shabaab has on Friday confirmed the death of Mohamed Kuno in a U.S. airstrike on June 1, 2016 near Kismayo city, some 500 kilometers (310 miles) south of Mogadishu.

In a statement, Al Shabaab said it is mourning the death of Kuno who has been a leading figure responsible for group’s attacks in Kenya.  Mohamed Kuno was a Somali-Kenyan who joined Islamic Courts Union in 2007 which metamorphosed into Al Shabaab in 2008.

Kuno also known as Dulyadayn was killed, along with four middle-level commanders after Somali commandos backed by US air-forces raided an Al-Shabab base in Bulo-Gadud, a rebel-held area, 30Km away from Kismayo city in Southern Somalia, early this month.

He was the most wanted Kenyan leader of Al Shabaab since Garissa University College attack that left at least 147 people dead, mostly students in April 3, 2015, the deadliest attack since Kenya sent troops to Somalia in October, 2011.

In 2015, the government of Kenya offered a reward of up to $215,000 for information leading to his arrest.  Kuno, 40s, was linked to the audacious attack on the Westgate shopping mall in Nairobi and was accused of orchestrating 12 fighters in a plot against the Kenyan parliament.