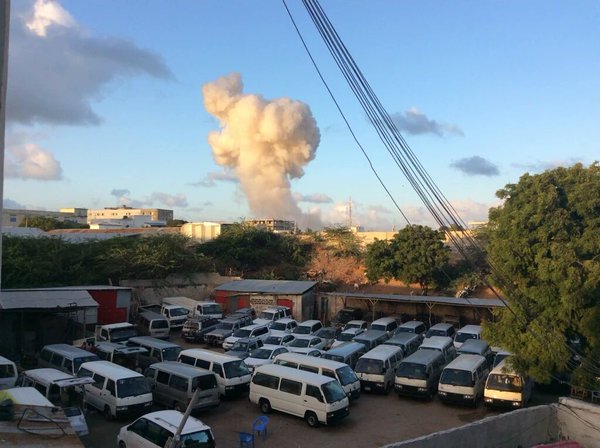 MOGADISHU, Somalia — The Al Qaeda-affiliated, Al Shabaab has claimed responsibility for the hotel attack, saying its fighters detonated a car, laden with explosives, at the gate of the Ambassador Hotel on Makka Al Mukarama St in Mogadishu on Wednesday at around 5:45 pm local time.

After the powerful car bomb blast, Al Shabaab gunmen managed to enter the building and take all occupants as hostages says Capt. Hussein Osman, a Somali police officer at the scene.
Somalian Special Forces, known as “Gaashaan”, soon arrived at the Ambassador Hotel, where they have engaged in a heavy gunfire with Al Shabaab attackers for at least six hours.
At least ten people, including two Lawmakers, are known to have been killed in the attack.
Two members of the Somalia’s federal parliament, Abdullahi Jama Kabaweyne and Mohamoud Mohamed Gure are confirmed dead while four lawmakers, Abdi Hashi Abdullah, Mohamed Omar Macalow, Abdullah Dayib and Mohamed Hirsi Duale were rescued by the security forces.
Somalia’s National Intelligence and Security Agency (NISA) said, in a statement posted Twitter, that three attackers tried to storm the hotel and one of them was killed by the guards.
But witnesses said several dead bodies were seen in the entrance of the hotel as Somali troops tried to rescue the people stranded in the compound.
The troops are still trying the end the siege of the hotel. Wounded victims have been rushed to a nearby hospital.

The majority of casualties came from the blast from the explosive-laden car which hit the front gate of the hotel. At the time of the explosion, the street was heavily congested with cars as well as pedestrians.

The death toll of casualties may increase from its current figure of 10 as more than 40 people, some of them in a critical condition, have been admitted to hospitals in the city.