SOMALIA, Jowhar (ArmedPolitics) – At least four people have been confirmed dead and three others wounded in a bomb explosion at an airport in Jowhar, located 90 kilometers (55 miles) north west of Somali capital, Mogadishu on Sunday.

Colonel Hashi Ahmed, a police officer in the town, told ArmedPolitics that the explosion was caused by a hand grenade that was thrown into the airport premises by Al Shabaab assailants. 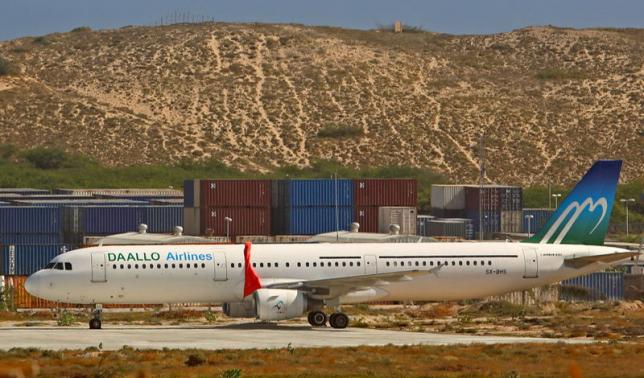 An aircraft belonging to Daallo Airlines is parked at the Aden Abdulle international airport after making an emergency landing following a bomb explosion inside the plane in Somalia’s capital Mogadishu, February 3, 2016. REUTERS/Feisal Omar

“Al Shabaab members have attacked the airport with grenade bomb and killed four security guards and wounded three other officers who have been admitted to the city’s general hospital for treatment,” said Ahmed by phone from Jowhar.

The Al Qaeda-affiliated, Al Shabaab, have claimed responsibility for the airport attack, according to the group’s operations spokesman Sheikh Abdulaziz Abu Musab who spoke to the pro-militant radio station, ‘Andalus’.

Al Shabaab has threatened to continue their attacks against Somali installations belonging to the Somali National Army (SNA) and AMISOM forces.

The attacks follow a massive crackdown against Al Shabaab mixing into the population from city police.

Despite the current security operation in Jowhar, there are still questions to be answered regarding the overall security of the city of which Somali and African Union troops are in full control.

Somali government troops, backed by the UN-mandated African Union peacekeeping soldiers, pushed Al Shabaab out of the district in December 2012 following an offensive.

The SNA soldiers have been battling militants in the region for years to liberate the middle Shabelle region from Al Shabaab.