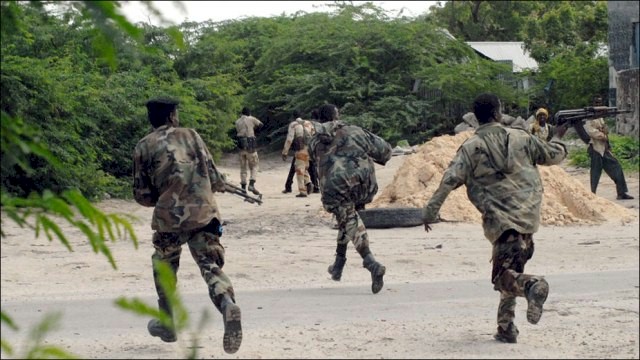 Clan Fighting rages on for the third day in Beledweyne, Somalia (File Photo)

BELEDWEYNE, Somalia (ArmedPolitics) — At least ten people have been killed and scores wounded, among them unarmed civilians, in clan fighting that continues for a third consecutive day, according to authorities.

The conflict began on Tuesday, according to local residents with the exchange of heavy artillery fire between two warring clans in the city of Beledweyne, 350 km (217 miles) north of the Somalian capital, Mogadishu.

Medical officials at Beledweyne General Hospital said, at least 20 people have been admitted, some of whom have obtained serious injuries.

Hundreds of Somalian families have fled built-up areas in the city for fears of stray mortar and gun fires, according to local officials who spoke to ArmedPolitics.

“It’s the worst fighting since the Al Shabaab left the city just 4 years ago, and even if the situation is calm now, the two sides continue to regroup,” Najib Hassan, a resident by telephone from Beledweyne city.

It can also be confirmed that the city’s Shabelle river burst its banks causing flooding in several villages surrounding the town, forcing dozens of families to flee their houses.

Although the fighting began on Tuesday, it has only intensified in the coming days. According to witnesses, the two sides exchanged heavy gunfire causing casualties on both sides as well as residents.

Our reporter in Mogadishu, Omar Nor, says that Djibouti-an and Ethiopian peacekeeping soldiers, stationed in Beledweyne, did nothing to intervene with the fighting despite serving with the African Union in Somalia Mission (AMISOM).

The continuing tribal fighting in the city is largely based on the reprisal of matters in an unsolved clan feud despite several attempts to end the hostility. A skirmish usually breaks out when one of the two sides commit a murder.

No peace negotiations have been commenced as of now and tensions remain high.